On Saturday August 17th at Arlington Park, a crowd of 27,431 gathered for the biggest day of racing on their calendar, the International Festival of Racing headlined by the Arlington Million. The Million wasn't the only Grade 1 race on the card with Breeders' Cup ramifications. The fillies and mares competed in the Beverly D. at 1 3/16 miles while the three-year-olds were entered in the Secretariat Stakes at 1 1/4 miles.

In the 20th edition of the Arlington Million, the powerful connection of trainer Bobby Frankel and jockey Jerry Bailey was represented by odds-on favorite Beat Hollow who lived up to expectations in this $1 million event.

When the gate opened, Jose Santos sent 4.60-1 third choice Forbidden Apple to the front with the 30-1 longshot Mystery Giver stalking him a length behind. They led the procession through initial fractions of 25.07, 50.18, and 1:14.89. At this point Mystery Giver tired and gave way. Beat Hollow, who had followed the pair to their outside the whole way, inherited second place. Down the stretch a cavalry charge ensued, with closers Sarafan, Ulundi, and Falcon Flight all making late moves towards the leaders. Forbidden Apple dug in to hold the lead through a mile in 1:38.7, but deep in the stretch he yielded grudgingly to Beat Hollow. Sarafan, who had been as far back as 5th, came on strong down the center of the course but could not get up for the win. Beat Hollow prevailed by a head in 2:02.94 over 1 1/4 miles of firm turf. Sarafan nosed out Forbidden Apple for the place money. It was a close finish down through sixth place with no more than heads and noses separating the horses.

The field passes by the first time with Forbidden Apple out front. 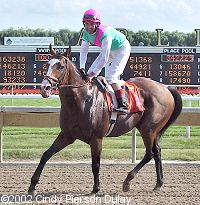 Beat Hollow and Jerry Bailey return after the race. After the race Bailey said: "He's a very handy horse. You can put him in anywhere in the race that you want. I was a little concerned when I got hung three wide into the first turn, but I didn't want to use him that early in the race to try to get position." 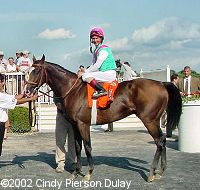 Beat Hollow in the winner's circle. Trainer Bobby Frankel said: "The race didn't set up the way I thought it would. I was a little scared of Forbidden Apple on the lead. We thought we'd be in the lead but when Forbidden Apple got the lead from the inside so easily, Jerry took back. I think he's going to go back to a mile for the Breeders' Cup. I think he'll be super going a mile." 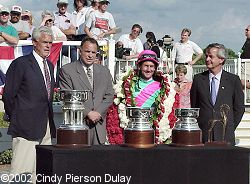 The trophy presentation. Dr. John Chandler, president of Juddmonte Farm the owner of Beat Hollow, said: "It's not a bad reason to come back (the million dollar purse) though it's not as good as two years ago when it was a $2 million race, but this is pretty good." 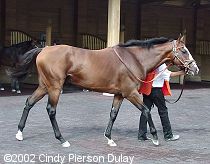 Beat Hollow in the paddock prior to the race. Jockey Jerry Bailey said after the race: "He'll be a better horse going a mile than he is at a mile and a quarter. That's about the extent as he wants to go but he tries hard and that's why he was able to gut out the win today." 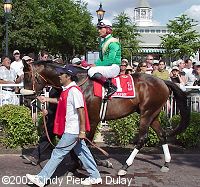 Second place finisher Sarafan heading out of the paddock for the post parade. Jockey Corey Nakatani said: "The pace was so slow that I wasn't in a good spot the entire race. Jerry's horse got the jump on me but that's racing. In the Breeders' Cup there will be a much more legitimate pace and I think we can turn the tables on him." 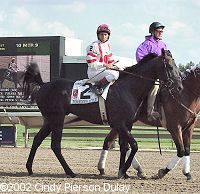 Third place finisher Forbidden Apple in the post parade. Jockey Jose Santos said: "He was the only speed in the race and he did everything in his power to win the race. He got beat by the best two horses going a mile and a quarter. I was probably beat a neck for everything."