Six top turf distaffers faced the starter in the Beverly D. at Arlington Park. Astra was sent off as the deserving 1.30-1 favorite off her three race winning streak, the last two in Grade 1 company.

When the gate opened, jockey Corey Nakatani sent the 3-1 third choice England's Legend to the early lead while Diana Handicap winner Tates Creek stalked her to her outside. England's Legend led the field for the first mile, with fractions of 24.94, 48.66 1:11.90, and 1:35.18. Second choice Golden Apples broke out of the gate slowly but got to the inside to save ground early, travelling in fourth down the backstretch. Going three wide on the far turn, jockey Pat Valenzuela asked her for her run while Astra, who tracked Golden Apples early on, also made a late charge. The pair closed the gap on England's Legend in the early stretch, then inside the 1/8 pole Golden Apples surged to the front and held off Astra for a 3/4 length victory in a time of 1:54.86 for the 1 3/16 miles. England's Legend was just a neck back in third.

First time by with England's Legend leading the way over Tates Creek and Golden Silca. Tates Creek's jockey Jerry Bailey said of her last place finish, "She had no kick today. I thought I was right where I should be but she didn't run her race at all." 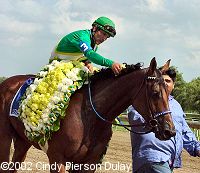 Jockey Pat Valenzuela tries to put flowers in Golden Apples' mane before heading to the winner's circle. Valenzuela said, "She ran a great big race. I knew she had the race won in my mind." 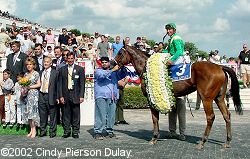 Golden Apples and the happy connections in the winner's circle. Trainer Ben Cecil said, "I think there's more improvement in her. We've been very lucky with [jockey Pat Valenzuela] and it worked out well. Maybe the Yellow Ribbon [next start] and then hopefully back here for the Breeders' Cup." 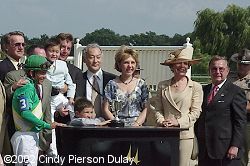 The trophy presentation with owner Gary Tanaka (center). Tanaka said, "We always thought Golden Apples could be one of the best fillies and mares. It was nice to see her put it all together." 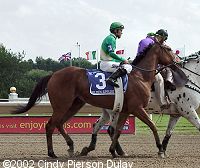 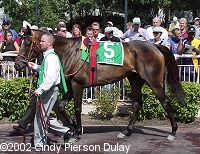 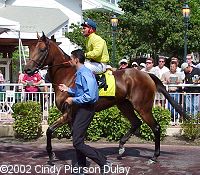 Third place finisher England's Legend heading out of the paddock for the post parade. Jockey Corey Nakatani said, "She did everything right considering she was running with these kind of horses. There was a little more pace in this race [compared to last year when she won] but mostly I think she would have liked a little more give to the ground."