Seven three year old turf specialists took to the track in the Secretariat Stakes. The Bill Mott trained Orchard Park was sent off as the 7-5 favorite, having won 5 of 6 starts in 2002 and winning 6 of 8 starts at the 1 1/4 mile distance.

In the early stages, Extra Check got away comfortably and saved ground with fractions of 24.74, 49.09, and 1:13.81 before relinquishing the lead to 4-1 shot Jazz Beat, who had stalked him to his outside. Jazz Beat opened up a three length lead by mid stretch after a mile in 1:38.55. The 3.60-1 second choice Chiselling was checked early and raced in last until the top of the stretch. Using a six-wide move he launched a sustained run on the outside. Passing three foes by mid stretch, he got his nose up for the win in the final stride over the surprised Jazz Beat in a time of 2:04.16. It was another 1 3/4 lengths back to Extra Check in third while favored Orchard Park failed to mount any rally and finished last. 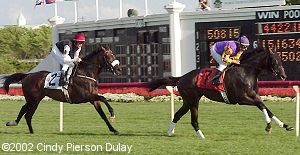 First time by with Extra Check and Jazz Beat far ahead of the rest. 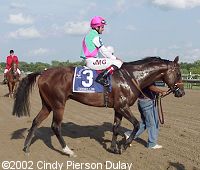 Chiselling and Kent Desormeaux prepare to enter the winner's circle. Desormeaux said: "This horse has been a treasure for us. I encouraged him to pick up the pace. In the end it was just the right amount. I was never certain I was going to get there until the last 50 yards." 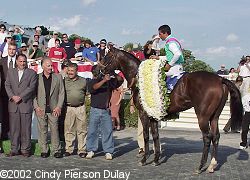 In the winner's circle. Desormeaux said: "It was a great day for him to shine. He's not mean, he's ornery. If you try to fight him, he's got a fight for you, but if you give him a second, he's all right." 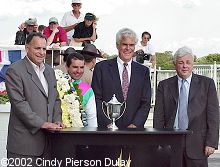 The trophy presentation with trainer Bobby Frankel and jockey Kent Desormeaux on the left. 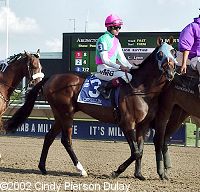 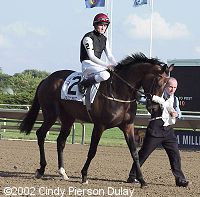 Second place finisher Jazz Beat in the post parade. His trainer Dermot Weld said: "Our horse ran a big race and he improved off the last time. He'll be back up again, hopefully. We'll take a look at the Canadian International and then maybe the Breeders' Cup Turf." 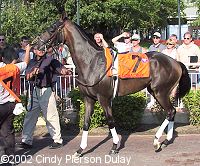 Third place finisher Extra Check was quite a handful in the paddock. His trainer Mike Stidham said: "We couldn't be happier. He ran a real game race. It looked like at the turn we were getting nothing and then all of a sudden he came on again. He inched right up behind arguably some of the best 3-year-old turf horses in the country. I still think there is room for him to improve."