The feature race on Championship Friday is the $2 million Longines Breeders' Cup Distaff (G1) (run for part of its history as the Ladies Classic), contested at 1 1/8 miles over the main track and usually decides Champion Older Female and Champion 3-Year-Old Filly. Three-year-old Songbird, undefeated in 11 lifetime starts including the Alabama (G1) and Cotillion (G1), was sent off as the 11-10 favorite in the field of 8. In to challenge her included 5-2 second choice Stellar Wind, 2nd in this event last year and winner of the Clement Hirsch (G1) and Zenyatta Stakes (G1), and 3-1 third choice Beholder, winner of the 2012 Juvenile Fillies and 2013 Distaff, but 2nd in 3 straight starts including the Hirsch, Pacific Classic (G1), and Zenyatta.

Jockey Mike Smith sent Songbird to the lead immediately and she set fractions of 23.32, 47.16, and 1:11.14 while pressed by 17-1 I'm a Chatterbox and stalked by Beholder. Songbird continued to lead to the 1/8 pole when jockey Gary Stevens asked Beholder to put in her bid for the front. The pair hooked up setting up an epic duel to the line, which was decided by a headbob, as Beholder nosed out Songbird in a tight photo finish for the win in 1:49.20. It was another 2 1/4 lengths back to 17-1 Forever Unbridled third. 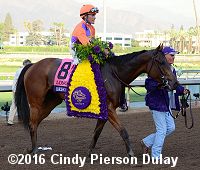 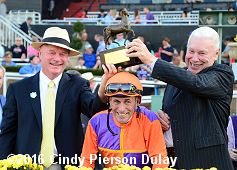 Left: Beholder heads to the winner's circle. Winning jockey Gary Stevens said, "I've been in battles before, but never the length of the stretch. I mean, it was a full 5/16ths, definitely a quarter of a mile of just a street fight. For six years old, I would just say the way that she's been managed throughout her career allowed her to do what she did on her final day of racing, and she laid it all on the line. The best of the best was training her, and he'd had this mapped out for a long time. The guy (Mandella) doesn't just get lucky. Things happen for a reason in that barn."

Right: Trainer Richard Mandella, jockey Gary Stevens, and owner B. Wayne Hughes celebrate with the trophy. Owner B. Wayne Hughes confirmed Beholder's retirement, joking, "I think it's time for her to go the normal route of going back to Kentucky and not having to have Richard and Gary to deal with. I don't have as much experience as Richard, but I can say that she's by far the best horse I've ever had or ever expect to have." 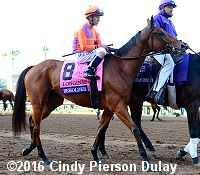 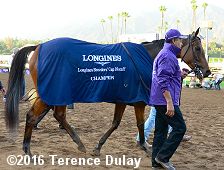 Left: Beholder in the post parade. Mandella said, "I thought the game needed some suspense, so I got her beat a couple times, figuring it would make it look like I did something really special at the end. You know, it's all in the planning. Anybody that saw her train would have had the same confidence. People would come out of the stands and tell me what they saw on the TV. So it wasn't hard to see. She was really at her best.|

Right: Beholder heads back to the barn with her new winner's blanket. Stevens added, "I think she had cemented her place in history prior to 2016, and she just added another star to it today. I've just never seen a racehorse stay at this peak form, especially a filly, and one that can be temperamental a little bit. But she thrives on racing. She thrives in her environment. For her to hold her form since her two-year-old season, and nowadays that's throwback." 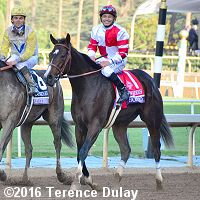 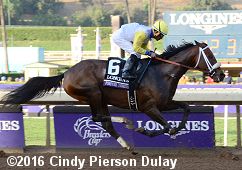 Left: Second place finisher and beaten favorite Songbird returns after the race. Jockey Mike Smith said, "She ran incredible and I'm so proud of her. The real Beholder showed up today. That was probably the best race she has run in her life. My filly made her reach down as deep as she has. In losing, I feel like we won. We got beat a short nose. It's easy when you are winning and you have to take it when you lose. Beholder is retiring but my filly will get bigger and stronger next year as they all do when they get older. She's a true champion."

Right: Third place finisher Forever Unbridled first time by the stands. Jockey Joel Rosario said, "I had a good trip. She relaxed nicely. The two that finished in front of me were too tough, but she really finished nicely; but third best today." Trainer Dallas Stewart added, "What a great race. Very proud of her. She only got beat a length by Songbird and Beholder." 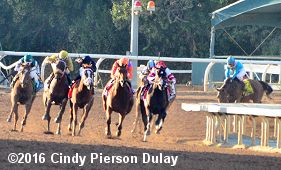 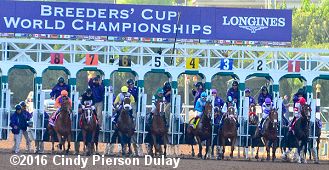 Left: Corona Del Inca pulling up on the final turn, and was eventually vanned back to the barn and later euthanized. Veterinarian Dr. Scott Palmer said, "Sadly the radiographs of Corona Del Inca revealed that she had a much more serious injury than it was apparent on the racetrack. She suffered a lateral condylar fracture of her right foreleg, a sesamoid fracture and a fracture of the first pastern bone. The nature of these injuries was so severe that there was no way she could be kept comfortable nor the prognosis be good for treatment. For those reasons she was euthanized."

Right: The field breaks from the gate for the Distaff. Gary Stevens aboard Beholder (outside post 8) said, "Very relaxed, and her start was probably the sharpest start of her career, believe it or not. She wasn't standing perfectly in there. She was kind of up in the front of the gate, and I like her back a little bit. But when you load last, you take what they give you, and, man, she left there. She charged for about 50 yards, and breaking from the outside looking in."