Kicking off the Championship races on Saturday was the $2 million 14 Hands Winery Breeders' Cup Juvenile Fillies (G1), featuring the best 2-year-old fillies going 1 1/16 miles on the main track. American Gal was the lukewarm 17-4 favorite in the field of 12 off her win in the Anoakia Stakes at Santa Anita. In to challenge her included 19-4 second choice Yellow Agate, winner of the Frizette (G1), and 5-2 third choice Sweet Loretta, undefeated winner of the Schuylerville (G3) and Spinaway (G1) both at Saratoga.

Jockey Rafael Bejarano sent 13-2 Noted and Quoted to the lead first time by and she set fractions of 23.77, 48.19, and 1:13.01 while pressed by 33-1 Champagne Room and stalked by Sweet Loretta. Entering the lane Noted and Quoted tired allowing Champagne Room to inherit a 2 length lead through 1 mile in 1:38.54. 7-1 Valadorna, 9th early, came through between horses for her rally but Champagne Room easily held her off by 3/4 length in 1:45.12. It was a long 3 1/4 lengths back to late-running favorite American Gal third. 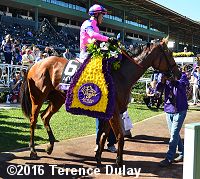 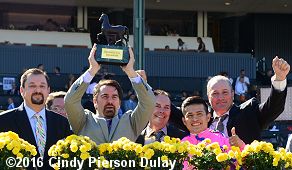 Left: Champagne Room in the winner's circle. Winning trainer Peter Eurton said, "Our whole thought today was just not get in her way, meaning don't choke her down. She's still a very aggressive by nature, and I think she's going to grow up out of that and maybe be a little more relaxed early on, so we just wanted to let her run out of there and think about where we are after that. Mario did an excellent job on getting her into good position."

Right: The trophy celebration. Managing parter Joe Ciaglia (holding trophy) said, "We started out really kind of claiming horses, Pete and I, and Mr. Alesia, and Mike Mellon. We were just happy winning. Slowly we started buying horses and learning from that, and Larry Zap, our Bloodstock agent, and we started spending a little bit more. It's great to have a group of people that can support us and buy in together. It's a lot of fun winning as a group. Mario, would not want to win with anybody else. He's got the greatest personality and greatest attitude." 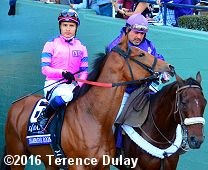 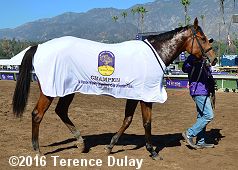 Left: Champagne Room heads out to the track before the race. Jockey Mario Gutierrez said, "She broke on top, and from that point on, the position really helped her as well. Then she was a little bit strong, but I was able to relax a bit in the backstretch and follow the buffer horse. From that point on, she was waiting until I said in the end, when I asked her, she was all game, she was all heart, and she demonstrated that all the way to the wire."

Right: Champagne Room heads back to the barn after the race. 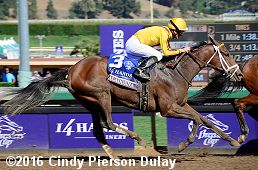 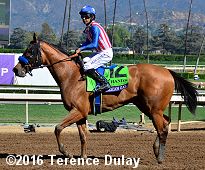 Left: Second place finisher Valadorna after the finish. Trainer Mark Casse said, "She ran great. She had a good trip and was maybe just a little bit late getting out with the soft fractions, but I was proud of her. It was the way I expected her to run. She's a very good horse. She needed (the education she got in her last race) today." Jockey Julien Leparoux added, "We had a pretty good trip, but there wasn't much pace. I had to wait a little bit on the turn and I think the winner got away from us."

Right: Third place finisher and beaten favorite American Gal returns after the race. Trainer Bob Baffert said, "I thought she ran an incredible race considering how wide she had to go the whole way. She's shown she can go a distance and what a good horse she is."

The fillies break from the starting gate for the Breeders' Cup Juvenile Fillies. Mike Smith aboard American Gal (12) added, "We broke real bad and it cost me the race. That's all it was."