The final Saturday of the 2016 Saratoga meeting featured four graded stakes contested before 30,271 fans. Conditions were ideal, with a fast main track, firm turf, sunny skies with temperatures in the mid 70's and a light breeze.

The highlight race on closing weekend is the $600,000 Woodward Stakes (G1). It is the major local prep for the Jockey Club Gold Cup (G1) and ultimately the Breeders' Cup Classic (G1), for older horses going 1 1/8 miles over the main track. A field of 9 faced the starter with Frosted sent off as the 2-5 choice off his wins in the Metropolitan Handicap (G1) and Whitney (G1). In to challenge him included 11-2 second choice Mubtaahij, 2nd in the Dubai World Cup (G1) and third in the Suburban (G2), and 8-1 third choice Bradester, winner of the Stephen Foster (G1) and Monmouth Cup (G2).

Jockey Joe Bravo sent Bradester to the front first time by and he set fractions of 24.38, 48.43, and 1:11.97 over the fast main track while pressed by 48-1 Breaking Lucky and stalked by 17-1 Samraat. Entering the lane, Bradester tired as Frosted, 6th early, moved up to take over the lead through 1 mile in 1:36.42 However, 9-1 fifth choice Shaman Ghost, 4th early, and Mubtaahij, 7th early, rallied late with Shaman Ghost prevailing by a head in 1:48.92. It was another head back to Frosted third, with Breaking Lucky finishing another head back in fourth to complete the four-horse blanket finish, a long 7 1/4 lengths in front of the rest of the field. 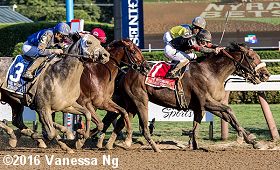 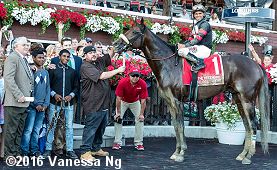 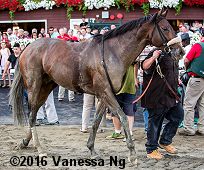 Left: Shaman Ghost in the winner's circle. Winning trainer Jimmy Jerkens said, "We didn't do a lot with him until we got up here. He seemed to perk up in Saratoga which some of them do. Javier didn't want to break his momentum (in the lane0. He would have had to take hold of him to take him to the outside. He said, 'I knew I had the horse, so I just went for it.' He said he wanted to beat Frosted to the punch, and the only way to get the head on him was to duck down to the inside. He saw daylight and he took off. I thought he had the potential. Brian (Lynch) did good with him. He won three in a row, including the Queen's Plate, which is the biggest race you can win in Canada. I was fortunate to get him. I guess you have to consider the Jockey Club Gold Cup, but we'll see."

Right: Shaman Ghost heads back to the barn after the race. 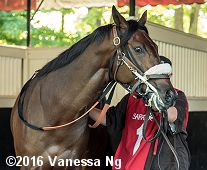 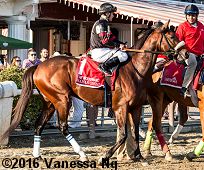 Left: Shaman Ghost in the paddock before the race.

Right: Shaman Ghost heads out to the track before the race. Winning jockey Javier Castellano said, "I am very happy and satisfied the way my horse ran today. He cut the corners, saved ground on the first turn and I could see how the race was developing on the backside. When I saw Frosted moving on the outside, I decided to go on the inside, cut the corners, split horses. The way (Shaman Ghost) did it, he was very impressive today. It was close, not as close as the (dead-heat in Spinaway) but I felt I knew I won the race.  The way he did it today, splitting horses - very impressive." 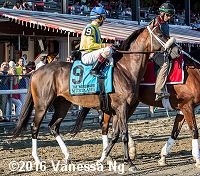 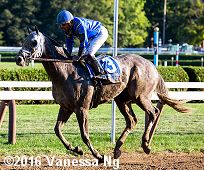 Left: Second place finisher Mubtaahij heads out to the track before the race. Trainer Kiaran McLaughlin said, "It just wasn't our day but we didn't get beat very far. Mubtaahij ran very well but just not himself."

Right: Third place finisher and beaten favorite Frosted returns after the race. Jockey Joel Rosario said, "He was comfortable where he was.  He normally comes off the pace and improves his position. There was no excuse today. He didn't break sharp. When I've ridden him before, he liked to take his time. He made a nice run. He got a little bit wide but he seemed good. He just got a little tired at the end. Every time I've ridden him, when I hit him with the whip, he didn't like it too much.  When I turned into the stretch I thought he was going home free. He looked nice.  Just the last 20 yards, it looked like he tired a little."

The $350,000 Spinaway Stakes (G1) is the premier race at Saratoga for 2-year-old fillies, contested at 7 furlongs on the main track. Cherry Lodge was sent off as the even-money choice in the field of 7 off her debut win on August 7. In to challenge her included 15-4 second choice Sweet Loretta, winner of the Schuylerville (G3) on opening day, and 4-1 third choice Runway Doll, a debut winner on July 31.

Cherry Lodge was quickest out of the chute through an opening quarter of 22.89 before Runway Doll took over on the far turn through a half in 45.81. Entering the stretch, Sweet Loretta, 4th early, came out 4 wide and opened up a 1 1/2 length lead through 3/4 in 1:11.30. 9-2 fourth choice Pretty City Dancer, 5th early, put in a strong late rally of her own with Sweet Loretta and Pretty City Dancer finishing in a dead heat for win in 1:24.18. It was a long 5 3/4 lengths back to favorite Cherry Lodge third. There was a brief stewards' inquiry looking at bumping between the co-winners in the stretch but the result stood. 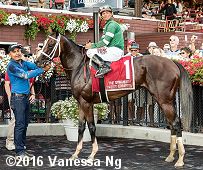 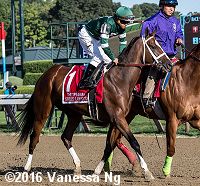 Left: Sweet Loretta in the winner's circle. Winning trainer Todd Pletcher said, "It was one of those head bobs that was going either way. I thought we got a really good bob but I still didn't know if we'd won. It was similar to yesterday, we had a filly in with Mark Casse's, and they exchanged bumps pretty good. I figured if they didn't change that one, they're not going to change this one, especially with a dead heat. It was a big effort from both fillies."

Right: Sweet Loretta in the post parade. Winning jockey Javier Castellano said, "I was able to ride her behind the speed. The last part of the race I knew she was going to get tired a little bit. I hit her left-handed and she drifted just a little bit and (Pretty City Dancer) came over and brushed up a little bit right on the wire. I knew it wasn't going to affect anything but I was very lucky to hold onto the dead-heat.  She is a nice filly and she will move forward. To be honest, I thought we got beat at the wire because my filly got tired the last part. But she responded all the way to the end. I am very proud of how she did it today." 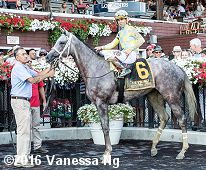 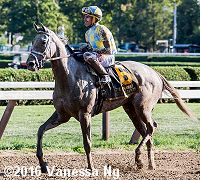 Left: Pretty City Dancer in the winner's circle. Winning trainer Mark Casse said, "I thought she was going to get there and then she kind of laid in. I never really saw the head-on, but I thought we won and then I thought we got beat. Then I met up with Todd and he said, 'Will you take a dead-heat?' and I said, 'I'll take a dead heat.' So that's what we got. Irad said when he hit her she jumped. I don't know, I didn't see, but they said she stumbled really hard at the start. She does that sometimes. She's a nice horse and I think she'll get better as she runs farther.

Right: Pretty City Dancer returns after the race. Winning jockey Irad Ortiz Jr. said, "I got a good trip, I can't complain. Late in the stretch I felt a little bump, but we still won the race so there's nothing wrong with that. Her style is to come running at the end. That was the plan going in. She showed up today." 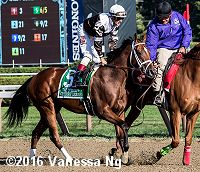 Third place finisher and beaten favorite Cherry Lodge in the post parade. Trainer Todd Pletcher said, "Cherry Lodge looked like she got a little bit tired. She was a little bit keen. Johnny said if he had to do it over again he might put her behind horses. She kind of spread-eagled at the start and got up and got a little headstrong. I think experience is key. Today, the two most seasoned horses were one-two. You kind of saw that trend throughout the day. There's no substitute for experience." 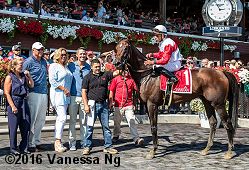 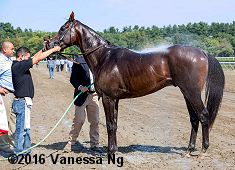 Left: Inspector Lynley in the winner's circle. Winning trainer Shug McGaughey said, "He had a good work on the turf here last Friday and I really had some confidence going in. But you always like to be able to find it if they're good enough. I didn't want to run him 1 1/16. We didn't figure there would be a lot of pace, in fact there was more than I thought there would be. He broke sharp from the inside so I said to hold your position. I think he'll put you where you want to be.' He then swung him out around the 1/8 pole, that worried me a little bit. But that's where he really kicked in. This horse wants to run as far as you want to run him."

Right: Inspector Lynley gets hosed off after the race. Winning jockey Joel Rosario said, "He broke beautifully out of the gate. There wasn't a lot of speed and I thought that I could hold my spot. He was very game and not too far from the pace, and I thought the race would not be that fast and he is looking at stronger horse's now. He is now putting it all together." 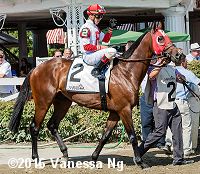 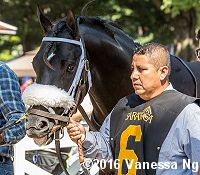 Left: Second place finisher and beaten favorite Camelot Kitten heads out for the post parade. The Chad Brown trainee improved his record to 4 wins, 3 seconds, and 0 thirds in 9 starts, earning $663,520 for owner-breeder Ken and Sarah Ramsey.

Right: Third place finisher Isotherm heads into the paddock before the race. The George Weaver trainee improved his record to 2 wins, 1 second, and 1 third in 7 starts, earning $228,950 for owner Matt Schera.

Closing out the stakes quartet on Saturday was the $200,000 Glens Falls Stakes (G3) for older fillies and mares going 1 3/8 miles on the inner turf course. Waya Stakes (G3) and River Memories Stakes winner Guapaza was the 5-2 favorite over 3-1 Suffused, second in the Waya after winning the Belmont Coronation, and 5-1 Itsonlyactingdad, winner of the Matchmaker (G3). 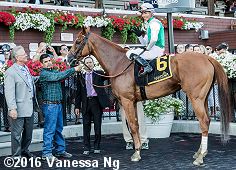 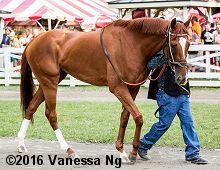 Left: Suffused in the winner's circle. Winning trainer Bill Mott said, "She had a beautiful trip, Jose gave her a great ride. I had a lot of confidence in her. When he produced her, she punched. I don't know (next star), I guess we have to look at everything, but I wouldn't rule out the Flower Bowl."

Right: Suffused in the paddock before the race. Winning jockey Jose Ortiz said, "I had a perfect trip. I followed (Miss Chatelaine) all the way around. When I asked her for run, she responded. It's pretty amazing (to win 5 races on the card). To do it here at Saratoga, where the competition is so tough, to do something Javier (Castellano) and Ramon (Dominguez) have done, I'm very lucky. It would be a dream come true (to win the riding title)." 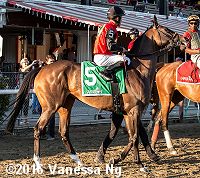 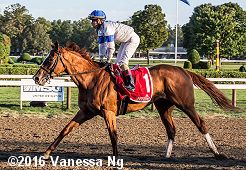 Left: Second place finisher Photo Call heads out to the track before the race. The Todd Pletcher trainee improvd her record to 5 wins, 3 seconds, and 4 thirds in 20 starts, earning $587,102 for owner Teresa Viola Racing Stables. 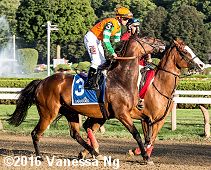 Sixth place finisher and beaten favorite Guapaza in the post parade. The Chad Brown trainee has a record of 8 wins, 6 seconds, and 4 thirds in 23 starts, earning $381,830 for owner Don Alberto Stable.