The $2 million Breeders' Cup Filly and Mare Turf featured 10 older fillies and mares going 1 1/4 miles on the turf. Beverly D (G1) and Kilboy Estate (G2) winner Dank was sent off as the 3-2 favorite over 9-2 Romantica, seventh in the Prix Vermeille (G1) after winning the Prix Jean Romanet (G1), and 6-1 Tiz Flirtatious, winner of the Rodeo Drive (G1) and John C. Mabee (G2). 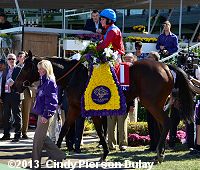 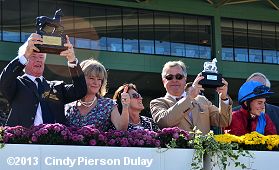 Left: Dank in the winner's circle. Trainer Sir Michael Stoute, celebrating his 6th Breeders' Cup win and 2nd in the Filly and Mare Turf, said, "You can see it quite clearly from her form that she likes it, the quicker the better.  When she worked in the Curragh, that was very fast that day.  That was the first time I felt that she belonged in this sort of class. I don't think she was at her very best at Royal Ascot.  There was an incident just before the race.  I think she should be unbeaten this year.  If he allows us to keep her going, she'll show them how good she is."

Right: The trophy celebration with owner James Wigan and trainer Sir Michael Stoute holding the trophies. Wigan said, "Well, they're (Stoute and Moore) the best.  I couldn't say anything more.  They're fantastic.  I've got the utmost confidence, and it's lovely to be with them. I'd love to come back (next year to repeat)." Stoute added, "I don't mind going into the winner's enclosure.  I'd like to keep her in training next year and I'm going to have to be quite persuasive." 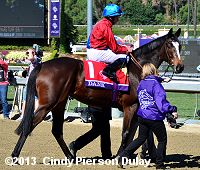 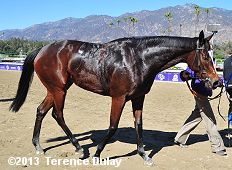 Left: Dank heads over to the turf before the race

Right: Dank heads back to the barn after the race. Jockey Ryan Moore said, "I thought she was the best filly.  You know, I'd rather have been drawn there than 6 and out.  So I just thought we'll just make the best use of it as we can, and try to push forward and make the others work to come around us.  I thought she'd stay very well.  I thought she was the best filly.  So we just kept it as straightforward as we could." Owner-breeder James Wigan added, "Well, they're (Stoute and Moore) the best.  I couldn't say anything more.  They're fantastic.  I've got the utmost confidence, and it's lovely to be with them. I'd love to come back (next year to repeat)." 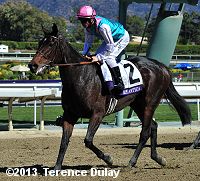 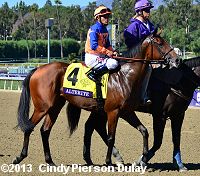 Second place finisher Romantica returns after the race. Jockey Maxime Guyon said, "It was a lovely race. I was beaten by the best horse.  I stayed in just behind her.  My horse went really well at the end and I'm really pleased with her.  It's exceptional being here at the Breeders' Cup."

Right: Third place finisher Alterite heads over to the turf course. Trainer Chad Brown said, "We wanted to be in the pocket where (Romantica) was, but when Laughing never left and (Dank) did leave, that went out the window.  She had to run two-wide the whole way but (jockey Javier Castellano) did find some cover behind Marketing Mix. It wasn't the best trip I was looking for that I got with (last year's winner) Zagora. But she did find cover and I thought she finished well. I'm proud of this filly being 3 years old and running three times in seven weeks. She'll get a lengthy, well-deserved break now."