There were 9 races on Day 2 of the 2013 Breeders' Cup World Championships. Of these, one of the more highly anticipated was the $2 million Breeders' Cup Mile (G1) for older horses going 1 mile on the turf. Defending champion and 2012 Horse of the Year Wise Dan was sent off as the 4-5 choice in the field of 10, exiting his disappointing off-the-turf 2nd in the Shadwell Mile (G1) after his course record performance in the Woodbine Mile (G1). Queen Elizabeth II (G1) winner Olympic Glory was the 9-2 second choice, over 9-1 No Jet Lag, winner of the City of Hope Mile (G2).

Wise Dan's regular jockey John Velazquez was injured earlier in the day in a spill when Secret Compass broke down in the Juvenile Fillies, and he was replaced by Jose Lezcano who has ridden Wise Dan a few times in the past. Velasquez had to have surgery to remove his spleen due to internal bleeding, but is said to be recovering well now. 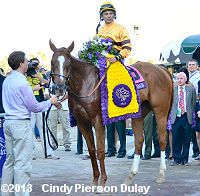 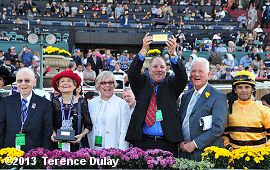 Left: Wise Dan in the winner's circle. Winning trainer Charlie LoPresti said, "I didn't realize he stumbled so badly leaving the gate.  I just didn't watch the break so close.  I was more concerned where front runners were going to be and how the race was going to set up.  I was just worried that he wouldn't run over top of horses and clip heels. But he got him to settle.  If you can get him in behind horses, he's a little bit strong.  But if you can get him in behind there, he'll switch off, and did he that on the back side.  He was further back than I've ever seen him, but that's not a bad thing because of the pace up front.  I wasn't sure he was going to get there, but I knew he was rolling around the turn.  I knew the front runners were getting slower."

Right: The trophy presentation with owners Mr. and Mrs. Morton Fink on the left and trainer Charles Lopresti, Santa Anita owner Frank Stronach, and jockey Jose Lezcano on the right. Owner-breeder Morton Fink said, "I don't think you can come up with the right words on how proud I am of him.  But I can tell you that I got my birthday party, which is one month from now, a little early this year, and he keeps me going.  As long as the horse is sound and close to being just like he is now, he runs (next year).  If he's over the hill, he's done more than enough for us, and he won't." 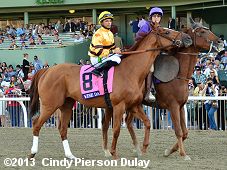 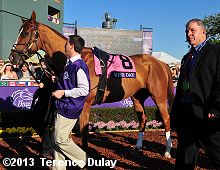 Left: Wise Dan in the paddock before the race. Jockey Jose Lezcano said, "Well, he stumbled out of the gate really bad.  He tried to break so fast that he just lost his balance. I had to let him go.  We tried to go to plan B, you know, waiting, and he gave me a good run and win the race."

Right: Wise Dan in the post parade. Charlie LoPresti added, "I think a lot of people lost some faith in him.  I never lost any faith in the horse.  I don't think that the weather conditions and the track conditions (at Keeneland) helped us.  I blame myself a little bit for it because he ran such a great race at Woodbine, and I didn't breeze this horse in between. I thought that he got so much out of that race and he was so great that maybe that was the wrong thing to do to breeze him, and I don't know that it got him beat." 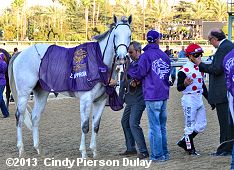 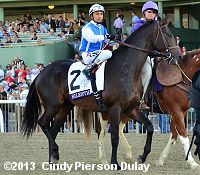 Left: Second place finisher Za Approval after the race with jockey Joel Rosario and trainer Christophe Clement on the right. Rosario said, "Had a perfect trip.  When he made the lead I thought maybe he was going to get there.  I knew somebody was coming and when I heard Wise Dan I said 'Oh, no!' My horse ran his best.  Wise Dan is just too good." Clement added, "It was a very fast-run race. I thought maybe he was moving a touch too early and I was wrong. He went very well. It took the Horse of the Year to beat him. It's annoying. I've finished second a few times in that race. But that's OK. We'll keep trying."

Right: Third place finisher Silentio in the post parade. Trainer Gary Mandella said, "He runs better fresh. I trained his father (Silent Name) and he was the same way. It was a perfect trip. He took advantage of his post and saved all the ground. This race set up for him. He doesn't want to be on the lead trying to steal the race. He wants to be on a loose rein and comfortable."