The highlight race of the Del Mar meeting is the $1 million TVG Pacific Classic (G1), featuring the best older horses of the west coast going 1 1/4 miles over the dirt, and is a Breeders' Cup Challenge "Win and You're In" qualifier for the Classic. 23,509 fans packed the seaside oval on Saturday afternoon under sunny skies and temperatures in the high 60's. As expected, Dubai World Cup (G1) winner Arrogate was sent off as the 7-10 favorite in the field of 7, off his disappointing 4th place finish in the San Diego Handicap (G2). In to challenge him included 3-1 second choice Collected, off a 3 race win streak including the Santana Mile, the Californian (G2), and the Precisionist (G3), and 13-4 third choice Accelerate, winner of the San Diego Handicap.

Jockey Martin Garcia sent Collected to the rail and to the lead exiting the chute and he set fractions of 23.76, 47.19, 1:11.06, and 1:35.27 over the fast main track while pressed by Accelerate and stalked by Arrogate. Turning for home, Collected got the jump on Arrogate, opening up a 2 1/2 length lead through 9f in 1:47.71. Jockey Mike Smith asked Arrogate for his best but Collected easily held him off by 1/2 a length at the line in 2:00.70. It was a long 3 3/4 lengths back to Accelerate third. 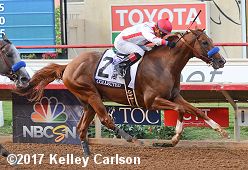 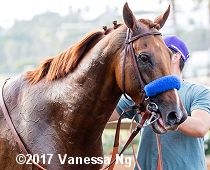 Left: Collected in the winner's circle. Winning owner Peter Fluor said, "Obviously, this is a big thrill. Arrogate is a legend and I'm a great fan. I guess you'd say I'm a bit humbled by all of this, but very proud to beat Arrogate. When I have a cocktail tonight, I'll say Collected is a special horse too."

Right: Collected heads back to the barn after the race. 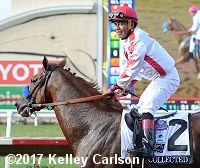 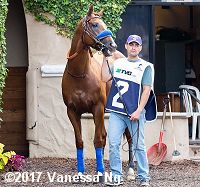 Left: Martin Garcia smiles as Collected returns after the race. Garcia said, "I liked where I was all the way around there. I could tell how fast we were going and my horse was relaxed. He felt so good, all the way around. When I asked him at the top of the stretch, he was running 100% worth. I hit him a few times, but he was giving me his all. I could feel Mike's horse (Arrogate) coming. It was like an animal creeping up behind me. But we had enough to get it done."

Right: Collected in the paddock before the race. 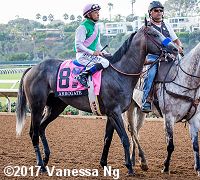 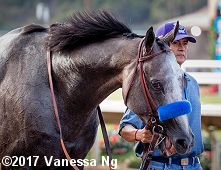 Right: Arrogate heads back to the barn after the race. Trainer Bob Baffert (who also trains the winner) said, "At least he tried today. He's getting there, but I think that when I ran him in the San Diego it messed up his psyche a little bit. I don't think I have a problem bringing him back in the Breeders' Cup Classic. But he's got to be fresh, just like Collected came in here fresh. And Collected is a very good horse." Jockey Mike Smith added, "If he just improves a little bit, we'll be all right. He was a lot better today than last time; just not good enough." 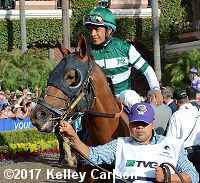 Left: Third place finisher Accelerate in the paddock. Jockey Victor Espinoza said, "He had pressure from both sides today and I had to use him a little bit more early. That probably cost us. But he ran big."

Right: The entire field of the Pacific Classic in the post parade.

Immediately before the Pacific Classic was the $250,000 Del Mar Handicap (G2) Presented by the Japan Racing Association for older horses going 1 3/8 miles on the turf, and is a "Win and You're In" qualifier for the Breeders' Cup Turf. Itsinthepost was sent off as the 5-2 favorite in the field of 13 off consecutive 5th place finishes in the Charles Whittingham (G2) at Santa Anita and the United Nations (G1) at Monmouth. In to challenge him included last year's winner, 3-1 second choice Ashleyluvssugar, off his 2nd place finish in the Eddie Read (G2), and 7-2 third choice Hunt, winner of the Eddie Read.

Jockey Santiago Gonzalez sent 25-1 Mr. Roary to the lead first time around the far turn through fractions of 24.40, 49.40, 1:14.88, and 1:39.09 over the firm going while pressed by 95-1 longest shot Prime Attraction and stalked by Ashleyluvssugar. Rounding the far turn for the last time, Mr. Roary tired allowing Ashleyluvssugar to gain a short lead through 10f in 2:03.25. Hunt, 4th early under Flavien Prat, came through on the rail and then outfinished late-running favorite Itsinthepost by 3/4 length at the line in 2:14.93. It was a head back to 18-1 Flamboyant third.s 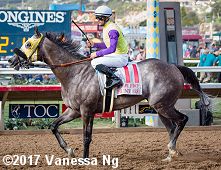 Left: Hunt in the winner's circle. Winning trainer Phil D'Amato said, "It was a masterful ride. Flavien (Prat) just bided his time, let the race develop a little, found a seam on the inside and turned him loose. He got it done."

Right: Hunt returns after the race. Winning jockey Flavien Prat said, "The slow pace helped us; he like that, coming from the shorter race. We were close up, too. He likes to be among horses; covered up. I followed Gary (Stevens on Ashleyluvssugar) through the hole (at the top of the stretch), then dropped down. He had it from there." 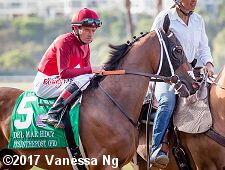 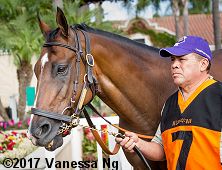 Left: Second place finisher and beaten favorite Itsinthepost in the post parade. Jockey Tyler Baze said, "He was way the best horse; way the best. I had to wait, wait, wait on the turn. If I could have gotten him out, we would have come running."

The final stakes on Pacific Classic day was the $300,000 Del Mar Oaks (G1) Presented by The Jockey Club for 3-year-old fillies going 1 1/8 miles on the turf. San Clemente Handicap (G2) winner Madam Dancealot was sent off as the 7-2 favorite in the field of 12. In to challenger her included 15-4 second choice Con Te Partiro, winner of the Sandringham Handicap at Royal Ascot, and 5-1 third choice Beau Recall, 7th in the Belmont Oaks (G1).

Jockey Rafael Bejarano sent 28-1 Blame It On Alphie to the lead exiting the chute through fractions of 23.61, 47.27, and 1:11.63 while pressed by 12-1 Meadowsweet and stalked by 34-1 Kenda. Turning for home, Blame It On Alphie tired allowing Meadowsweet to inherit the lead through 1 mile in 1:36.18. 13-2 fourth choice Dream Dancing, 12th early under Julien Leparoux, came out 6 wide into the lane and outfinished Beau Recall by a nose in 1:48.06. It was a neck back to favorite Madam Dancealot third. 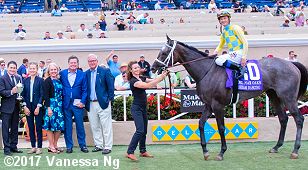 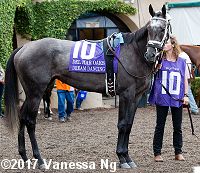 Left: Dream Dancing in the winner's circle. Julie Stormfelt, assistant to winning trainer Mark Casse said, "There was a very good pace up front, which she likes. She has more than one run and a very good kick and when I saw her coming down the stretch I was just screaming, very happy. This is my first time travelling with a horse and it's nice to be a winner."

Right: Dream Dancing in the paddock before the race. Winning jockey Julien Leparoux said, "No special instructions from Mark (Casse). The last time I rode her, I asked her at the three-eighths and she got a little weary at the end. This time I tried to wait as long as I could and she was still strong at the finish. This feels good; a win is a win, no matter where you get it." 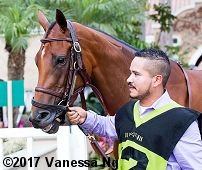 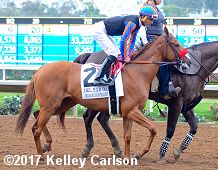 Left: Second place finisher Beau Recall in the paddock before the race. Jockey Joe Talamo said, "I've had my fair share of bad beats in my career, but this one has to rank right up there (with the worst of them). Nasty. I had a good trip, she fought when (Dream Dancing) came up outside her, but we just got beat."

Right: Third place finisher and beaten favorite Madam Dancealot in the post parade. Jockey Jamie Theriot said, "I had a great trip. I was getting through all the way on the rail. At the top the stretch I saw a hole and I said ‘If I can get through there, this is going to be one of the great rides.' I got through, just barely. I felt my horse brush horses on both sides of me. But I had to alter stride for two jumps and that cost me. She ran great and tried hard. Almost."