Day two of the 29th Breeders' Cup World Championships took place Saturday at Santa Anita Park before a crowd of 55,123 enjoying clear skies and temperatures in the 80's. The main track was fast and the turf firm as is typical during the autumn meeting formerly known as Oak Tree.

The $5 million Breeders' Cup Classic (G1) is the richest race in North America, featuring top older horses going 1 1/4 miles on the main track, in a race that often decides Champion Older Horse, Champion 3-Year-Old Male, and/or Horse of the Year. Awesome Again Stakes (G1) winner Game On Dude was sent off as the 6-5 favorite in the field of 12 over 6-1 second choice Flat Out, winner of the Jockey Club Gold Cup (G1), and 13-2 third choice Mucho Macho Man, second in the Woodward (G1) after winning the Suburban (G2). 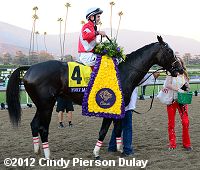 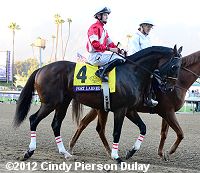 Left: Fort Larned parades with his flowers after winning the Classic. Winning trainer Ian Wilkes said, "The most important thing I told Brian was the break. We have to get out of the gate. If we miss the break we're dead. We have to get out of gate good and we can't be pinned down inside; we have to be out of there, goin' and then ride the race from there. That's what he did. He made a great move coming out of the gate and we were fortunate that Game On Dude broke a step slow and (Fort Larned) was able to get out instead of being tucked down on the inside down the back stretch, instead of being dictated to, we were able to dictate the race."

Right: Fort Larned in the post parade. Wilkes added, "When you got a horse, you know, that keeps getting better and better every time you take him over there, it makes my job easier. The thing about it every time this horse went in the gate, he's always brought his "A" race for us." 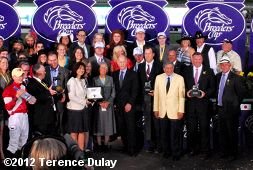 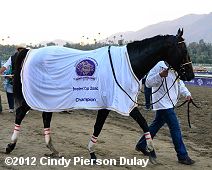 Left: The trophy presentation in the winner's circle. Winning jockey Brian Hernandez Jr. said, "In the post parade he showed how fired up he was. He was on his game today. We kept him away from the pony and warmed him up good. When he left the gate, he knew it was business time and he left there as well as he did. He's going to be naturally fast and that's what we let him do. Going into the second turn he was able to sprint away from that other horse and he held off the horses down the stretch.

Right: Fort Larned heads back to the barn in his winner's blanket. 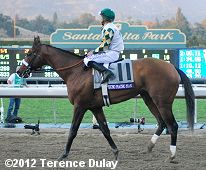 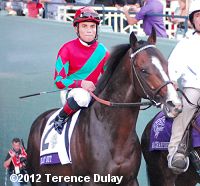 Left: Second place finisher Mucho Macho Man returns after the race. His jockey Mike Smith said, "I really, really wanted to win this race for Kathy (Ritvo). Not for me, but for Kathy. He was different today. He just ran big. The other horse (Fort Larned) snuck away from me and I wasn't able to keep up with him at that point. Brian (Hernandez) has always been a great rider. He has great hands, I've known him since he started, and I knew he was going to win a race like this some time. I just wish it hadn't been today."

Right: Third place finisher Flat Out heads out to the track before the race. Jockey Joel Rosario said, "I had a perfect trip. He was so relaxed all the way around there, even in that big field. We got a good spot and I was waiting for the time. Then when I asked, he kicked it in. He ran well through the stretch, but (Fort Larned and Mucho Macho Man), they were better today. Today it was them." 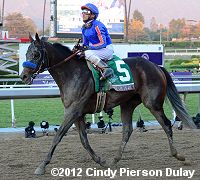 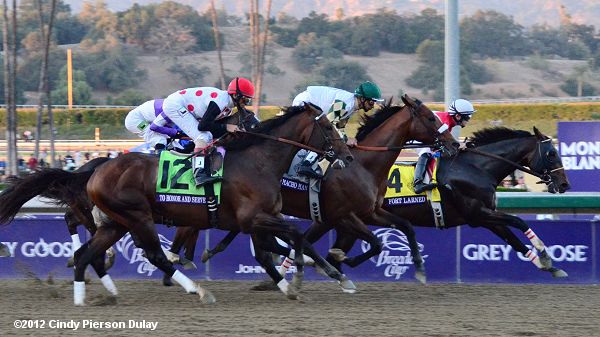 Left: Seventh place finisher and beaten favorite Game On Dude returns after the race. Trainer Bob Baffert said, "I think the first 1/8 mile cost him the race. He wants to be right up there near the front and when he wasn't, that was it for him. It was unfortunate." Jockey Rafael Bejarano added, "He broke from the gate so well. They rushed up past us, but that didn't matter. I got a good spot and made him comfortable. We were right where I wanted to be, and at the 3/8 he gave me his move. And then, all of a sudden, he was flat; totally out of gas."

Right: First time by with Fort Larned and Mucho Macho Man, the eventual exacta, already out in front followed by To Honor and Serve (10th) and Handsome Mike (9th).