The first Championship race on Saturday was the $1 million Breeders' Cup Juvenile Turf (G1), a 1 mile test around 2 turns of the 7 furlong infield oval at Santa Anita, and was run under the new Breeders' Cup rules prohibiting race-day medications in the 2-year-old divisions. Noble Tune was sent off as the 7-2 favorite in the full field of 14 off his Pilgrim (G3) win at Belmont Park. In to challenge him included 9-2 second choice Dundonnell, second in the Champagne (G2) after winning the Acomb (G3), and 6-1 third choice Artigiano, second in both the Vintage (G2) and Royal Lodge (G2).
Jockey Corey Nakatani sent 56-1 longest shot Summit County to the front and he set fractions of 22.48 and 46.47 while pressed by 43-1 I'm Boundtoscore. On the turn, the pacesetters tired as 18-1 Brown Almighty gained the lead at the top of the lane through 3/4 in 1:10.26 before tiring as well. 9-1 George Vancouver, 7th early, came through between horses to win by 1 1/4 lengths over Noble Tune in 1:33.78. It was just a neck back to 10-1 Balance the Books third. 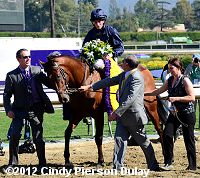 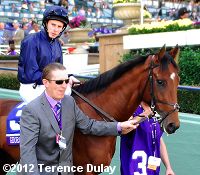 Right: Co-owner Derrick Smith leads George Vancouver to the winner's circle. Trainer Aidan O'Brien said, "Yes, we always thought he was a very good horse. His first two runs were on bad ground and we took him to the fast ground and he went there and won very easy. We were always thinking it would be fine for him, the ground was always what we were hoping would make the difference and obviously Ryan had rode him with great confidence from Deauville and he thought that this track and this ground and race would suit him."

Left: George Vancouver heads out for the post parade. Jockey Ryan Moore said, "He traveled very easy and he had a small gap. But that much horse he had plenty to go through there and I was in front a little bit too soon on him. It was a little longer than people give the short straight credit for and when he got there he gave a look and hung out to the right, so I think there is a bit more in the locker room. I had a smooth race and that's what you need in these sort of races. You need a bit of luck and things to work out for you and we had that today." 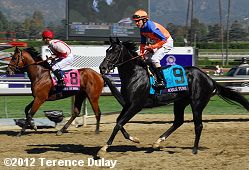 Second place finisher and beaten favorite Noble Tune (right) and third place finisher Balance the Books return after the race. Trainer Chad Brown, who trains them both, said, "They ran great. They ran into a really good horse today. One beat the other for second (by a neck). They trained close. Everyone has watched them breeze in New York, and they all know they are noses apart and they ran that way. They beat the rest of the horses in the field, which was a deep field. They clearly have identified themselves as the two top 2-year-old turf colts in the country coming into their 3-year-old year."

Noble Tune's jockey Ramon Dominguez said, "I was very happy with the way the horse performed. We had a good trip. Of course you hate to see the winner getting through while your horse is running on the outside. But that's what happens in a 14-horse field."

Balance the Books' jockey Julien Leparoux said, "He's a good horse. He'll move up with a little more distance. I had a very smooth trip, not really any trouble except for the usual bumping. We started to move leaving the far turn and there was no traffic at all, but then at the head of the lane I had to wait a little bit, and that was it."