Jockey Joe Bravo sent 46-1 longest shot Turbo Compressor to an uncontested lead down the hill and past the stands first time through fractions of 23.63, 46.11, 1:10.80, and 1:35.28 over the firm course, with 23-1 Optimizer stalking him in second and 17-1 Little Mike settling behind them in third. At the top of the stretch for the last time, Turbo Compressor tired badly to eventually finish last after 10 furlongs on 1:59.58. Little Mike took over the lead at the 3/16 pole, and held off late-running favorite Point of Entry by 1/2 a length in a very fast 2:22.83, just 3/100 second off the course record. It was just 3/4 length back to St Nicholas Abbey third. 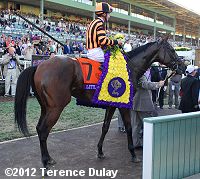 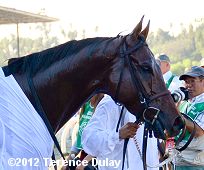 Left: Little Mike in the winner's circle. Owner Priscilla Vaccarezza said, "I have to say when no one believes in Little Mike, he does it. When he's not the favorite and no one thinks he can do the extra distance and when I'm nervous and don't think he has a chance, he wins! Maybe they will give him some respect after that, I don't know." Trainer Dale Romans added, "We have been planning all year, stretch him, stretch him, stretch him. And we had a kneejerk reaction after the race at Belmont on the soft turf and we decided the best thing was to go 1 1/2 and control the race. He's a phenomenal horse. He's an overachiever and he's proven us all wrong. I don't think anybody up here thought he could be more than a miler last year and now we don't know where his limit is."

Right: Little Mike heads back to the barn. Jockey Ramon Dominguez said, "I couldn't commit to being on the lead (because of the distance). I did get a great trip right off the leaders.  When I asked him to run, he gave me a great kick." 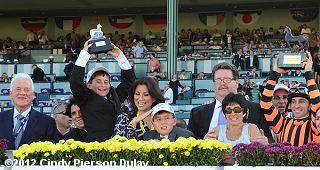 The trophy presentation with Little Mike's namesame holding one and jockey Ramon Dominguez holding the other. Owner Priscella Vaccarezza is next to Mike, Frank Stronach owner of Santa Anita is on the far left, and trainer Dale Romans and his wife Tammy Fox are next to Ramon. 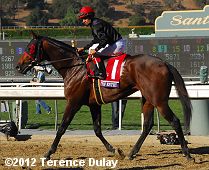 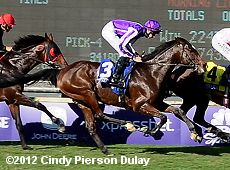 Left: Second place finisher and beaten favorite Point of Entry in the post parade. Jennifer Patterson, assistant to trainer Shug McGaughey said, " "He was further back today with that quick pace.  He's a very versatile horse and he'll do what you ask him.  It's a shorter stretch here and he had a lot to make up.  With this fast turf, they don't come right back to you.  With the fractions that fast, I wasn't unhappy with his position.  Maybe he could have moved a little earlier, but that's easy to say now. He ran his heart out and tried as hard as he could, but just came up a little short."

Right: Third place finisher St Nicholas Abbey returns after the race. Jockey Joseph O'Brien said, "The trip was a good one for me.  He relaxed well off a fast pace.  When I asked him, he responded.  We had to go a bit wide on the turn, but nonetheless he ran very well." Trainer Aidan O'Brien added, "He gave a good solid run.  He didn't quite pick up like he did last year.  He had a hard race in the Arc.  He came with a nice run.  He did nothing wrong and it's great to be third."