A field of 10 older fillies and mares went to post in the $1 million Breeders' Cup Filly and Mare Sprint (G1), a 7 furlong trip around one turn of the main track. Groupie Doll was sent off as the 7-10 favorite off her 4 race winning streak including the Presque Isle Masters (G2) and Thoroughbred Club of America (G2). In to challenge her included 9-2 second choice Dust and Diamonds, winner of the Gallant Bloom (G2), and 13-2 third choice Turbulent Descent, fourth in the Gallant Bloom after winning the Ballerina (G1).

50-1 Teddy's Promise battled for the lead exiting the chute and down the backstretch with Dust and Diamonds through fractions of 22.23 and 44.19, while stalked by Turbulent Descent. On the far turn, jockey Rajiv Maragh asked Groupie Doll for run and she responded, powering by the competition 4 wide to win going away by an impressive 4 1/2 lengths in 1:20.72. It was another 3 3/4 lenghths back from Dust and Diamonds to 10-1 Switch third. 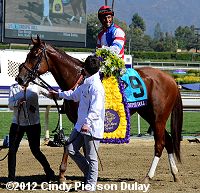 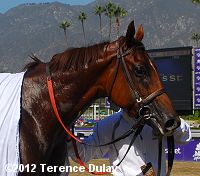 Left: Groupie Doll heads to the winner's circle. Owner Fred Bradley said, "It was a great thrill, but everybody is surprised. I don't know what they're surprised about. We thought she was going to win all the way and my partner Brent Burns, and Carl, wherever he is and my son, of course, the trainer. I want you to know I bred this horse, I bred this trainer too." Trainer Wiliam "Buff" Bradley added, "The filly has a good demeanor to her. She takes everything in, and she is pure class. With that and the team that I have and the care that they have put into her, I think that's why we have been able to keep her at this level."

Right: Groupie Doll heads back to the barn after the race. Jockey Rajiv Maragh said, "Going into the race my strategy was to get a clear trip and be confident in the her ability to overcome any bias in that area. The most crucial thing was to get her clear and into her comfort zone and she'll do most of the running and she is consistent and I trust her a lot and she trusts me and we make a great team which worked out so far." 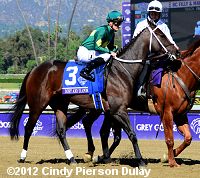 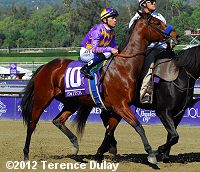 Left: Second place finisher Dust and Diamonds in the post parade. Jockey Julien Leparoux said, "She ran beautifully. We had a good trip and at the 1/4 pole she just took me. I thought I was on the winner. But the winner came by me and she was best today. She's a good filly. But my filly is very good also." Trainer Steve Asmussen added, "She ran her race and gave everything she had.  Julien gave her a great ride.  I am very proud of here.  She got beat by Groupie Doll, a good horse, and our mare has had a great year."

Right: Third place finisher Switch in the post parade. Jockey Garrett Gomez said, "This is a really nice filly.  She ran a big race.  She always comes with a big run at the end, and that's what she did today.  The other two just had too much space on us."