Kicking off the championship races for the 2012 World Championships was the $500,000 Breeders' Cup Juvenile Sprint, a 6 furlong test over the main track restricted to 2-year-olds, and for this year's Championships, all juvenile races were run without race day medications. After Super Ninety Nine and South Floyd were scratched by the veterinarians, a Breeders' Cup record smallest field of just 5 entered the starting gate, with Tim Conway Stakes winner Merit Man sent off as the 1-2 favorite over the two fillies in the race, 7-2 second choice Sweet Shirley Mae off her runner-up finish in the Spinaway (G1), and 11-2 third choice Ceiling Kitty, winner of the Queen Mary (G2) at Royal Ascot but seventh in the Cheveley Park (G1) last out.

Meit Man and Ceiling Kitty battled for the lead down the backstretch and around the turn through fractions of 22.41 and 45.94 while stalked by 9-1 Hazardous. Ceiling Kitty tired at the top of the lane allowing Merit Man to inherit the ead, but 15-1 longest shot Hightail, fourth early, came on late to win by a nose in 1:09.75. It was a long 2 1/4 lengths back to Sweet Shirley Mae third. The lead pair bumped in the stretch leading to an inquiry but the stewards allowed the result to stand.

This win was the 19th Breeders' Cup win for trainer D. Wayne Lukas, who last won in 2005 with Folklore in the Juvenile Fillies. 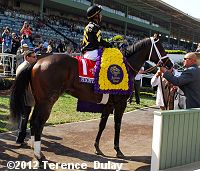 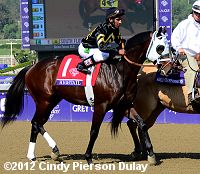 Left: Hightail in the winner's circle. Winning jockey Rajiv Maragh said, "My horse broke and was up close and the speed developed in front of him and the favorite was right in front of me so it kinda worked out good for me to stay on the rail and follow the horse that I thought was going to kick in during the stretch. I had to wait a moment to see what Patrick Valenzuela (aboard Merit Man) was going to do, and I had to go up on the inside. Once I got up on the inside he saw that I got there, but he established the position and he initiated contact with my horse."

Right: Hightail in the post parade. Trainer D. Wayne Lukas said of the horse possibly running in the Kentucky Derby, "We will look at this horse seriously because I think he's versatile. A dear friend of mine appointed this horse out, actually bought him as a yearling, John McKay at Little Rock, Arkansas. He pointed that horse out in a sale and we bought him because of that and nothing would please me more to do than what you're saying, and instead we will stretch him out to 1 1/4. He has the pedigree and enough tactical speed, he's a big strong horse, sound and hell, we'll nominate him, you know that! 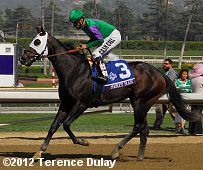 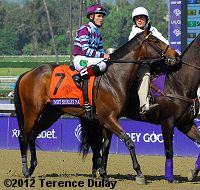 Left: Second place finisher and beaten favorite Merit Man returns after the race. Trainer Bob Hess Jr. said, "Patrick said (Hightail) came out and bumped him a couple times. He dropped back a neck or so and came back to be beat a nose. It is what it is. This guy needs a target. He had no target. When South Floyd came out of the race (late scratch at gate), it was almost a negative." Jockey Patrick Valenzuela added, "He shot out of there and we were there most of the way. The stewards made the decision, but I still thought I was on the best horse."

Right: Third place finisher Sweet Shirley Mae in the post parade. Jockey Joel Rosario said, "I thought they (Hightail and Merit Man) were going to go the way they did. She ran a good race. They were just a little better. It was a good race for her."